Reversing the combustion process to convert CO2 into ethanol

The danger of the ever-increasing levels of carbon dioxide (CO2) in Earth's atmosphere has become one of the most pressing issues of our age. As such, much research has been conducted to find ways not only to reduce it, but also in ways to remove it. 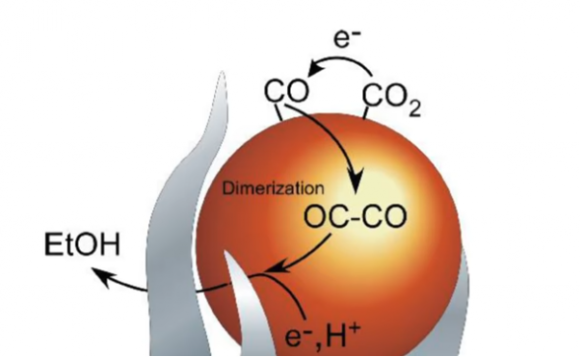 This has led to many schemes that simply sequester CO2 underground, or store it in volcanic rocks. More ambitious schemes even aim to not only remove this gas, but to usefully employ it to create usable products, such as plastics and foam, or even to produce hydrocarbon fuels. Now scientists from the Oak Ridge National Laboratory (ORNL) claim to have produced one of the most usable of all chemicals – ethanol – in a process that is not only cheap, efficient, and scalable, but also conducted at room temperature.

Employing a catalyst made of copper nanoparticles embedded in spikes of carbon, the team found that electricity applied at just 1.2 volts was sufficient to convert CO2 suspended in water into ethanol. In effect, the team were able to produce a complicated chemical reaction, essentially reversing the combustion process, with relative ease and an initial conversion rate of some 63 percent. This was a surprise to the researchers, as this type of electrochemical reaction often produces many different chemicals, including methane, ethylene, and carbon monoxide.

"We're taking carbon dioxide, a waste product of combustion, and we're pushing that combustion reaction backwards with very high selectivity to a useful fuel," says Dr Adam Rondinone, of ORNL. "Ethanol was a surprise – it's extremely difficult to go straight from carbon dioxide to ethanol with a single catalyst. We discovered somewhat by accident that this material worked, we were trying to study the first step of a proposed reaction when we realized that the catalyst was doing the entire reaction on its own."

Whilst many of the metals used in other such studies into converting CO2 into a useful fuel, such as titanium dioxide used in the University of Texas' experiments converting CO2 to liquid hydrocarbons, are often rare or expensive, the ORNL work uses inexpensive copper combined in a novel way with carbon to form fields of nanospikes on an inert silicon substrate. It is this particular arrangement that provides an abundance of reactive sites within the material to so effectively and efficiently produce ethanol.

"By using common materials, but arranging them with nanotechnology, we figured out how to limit the side reactions and end up with the one thing that we want," said Dr Rondinone. "They are like 50-nanometer lightning rods that concentrate electrochemical reactivity at the tip of the spike".

In detail, the dense nanotextured carbon film created by the ORNL team contains randomly-positioned nanospikes approximately 50–80 nm in length, each of which consists of layers of wrinkled carbon ending in a tip about 2 nm wide. The film was grown using a comparatively simple chemical vapor deposition technique employing acetylene and ammonia as the reagents (the substances used to initiate the chemical reaction).

Acting as one of a pair of electrodes, this film of nanospikes had an electrical current run through it and the electrochemical reaction produced by this combination saw a large proportion of the CO2 electrons dimerized (a chemical reaction where two molecular subunits are joined) into ethanol.

The researchers believe that their technique's use of inexpensive substances and ability to produce ethanol could easily be up-scaled to commercial levels, and even in alternative energy-storage systems where excess electricity generated by wind and solar could readily be turned into liquid fuel.

"A process like this would allow you to consume extra electricity when it's available to make and store as ethanol," said Dr Rondinone. "This could help to balance a grid supplied by intermittent renewable sources."

Plans are in train by the ORNL researchers to better improve their methods in an aim to increase ethanol production rates and to better determine the full mechanism of selective chemical production of the copper/carbon catalyst.

The results of this research were recently published in the journal Chemistry Select.

The video below shows the ORNL team demonstrating and explaining their technique.

Science can help to live better and safer life/