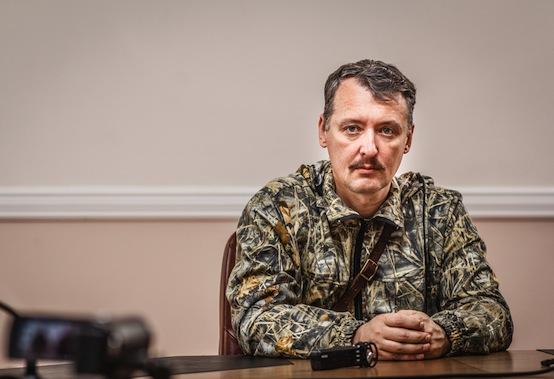 Speaking in Crimea on August 14, Vladimir Putin recalled that the peninsula had been the last refuge of the anti-Bolshevik White Russian army in 1920 before it fled Russia, bringing the Russian Civil War to an end. Formerly a site of fratricidal conflict, the Crimea should become a site of “reconciliation between Reds and Whites,” said Putin, a call which paralleled his appeal for an end to the conflict in Ukraine. The Soviet Union collapsed only 22 years ago, so there are still some old Reds floating about, but there certainly aren’t any of the original Whites, the last of them having died in the 1990s. Nevertheless, in different forms the old Red-White struggle continues, and its legacy has a surprising relevance to the war in Ukraine.

In particular this struggle helps to explain Russia’s relationship with the rebels and some strange goings-on in the leadership of the rebel Donetsk and Lugansk People’s Republics. First, the notional civilian heads of the two republics, Alexander Borodai and Valery Bolotov, both quit their posts. Second, on August 14, the most prominent of the rebel military commanders, Igor Strelkov, resigned as well. This came as a shock to the rebels’ supporters, for Strelkov had become a cult figure in Russia, where many view him as a combination of military genius and honorable warrior. It was clear that Moscow had forced him out, but why?

Strelkov and Borodai were Russian citizens, whereas their replacements are Ukrainians. A simple explanation for their removal is that Moscow wanted to put the rebellion into local hands. There seems to be more to it than this, however. Strelkov in particular had become a rallying point for the nationalist opposition to Putin inside Russia. This meant that he had to go.

According to a source close to Strelkov, he was much preocuppied by the Red-White division in his final days as rebel commander. In a recent statement, he declared that “I am closer to the ideology of the White Guard.” Strelkov appears to imagine himself as a reincarnation of a late Imperial army officer, bound by a strict code of honor and a belief in “Faith, Tsar, and Fatherland.” A sort of modern-day Oliver Cromwell or Stonewall Jackson, he sought to turn a rag-tag militia into a proper army founded on military discipline and Christian values. To this end, he issued an unusual order banning swearing among his troops, writing: “We call ourselves an Orthodox army and are proud that we serve not the golden calf but our Lord Jesus Christ. … Swearing is blasphemy, which has always been considered a serious sin. … A Russian warrior cannot use the language of the enemy. It demeans us spiritually, and will lead the army to defeat.”

Strelkov also instructed his troops to treat prisoners in accordance with the Geneva Conventions, and notoriously ordered the execution of three of his soldiers for petty looting. He criticized one of his subordinates, Igor Bezler, for what Strelkov considered a cowardly, and thus dishonorable, attack on a Ukrainian roadblock that killed 15 Ukrainian soldiers. Whereas other representatives of both sides of the conflict in Ukraine regularly exaggerate their victories, Strelkov acquired a reputation for honesty due to his willingness to admit when his troops had been defeated.

Western descriptions of Strelkov have tended to focus on allegations that he is an agent of the Russian government, a member either of the Russian secret service, the FSB, or of Russian military intelligence, the GRU. This may be true, but it obscures another reality, which is that Strelkov and those around him pursued an eccentric agenda of their own.

Strelkov himself is a former colonel in the Russian army who fought in Chechnya, in the breakaway Moldovan republic of Transdnestr, and alongside the Serbs in Bosnia. Ideologically, he is extremely conservative and quite possibly a monarchist. After assisting in the seizure of the Crimea, he arrived in Donetsk in May 2014, whereupon he took control of the rebellion’s nascent army. With a handful of men, he moved to the town of Slavyansk and built up a force of about 2,000, mainly local men and women. Strelkov’s troops attracted the attention of some of the most powerful elements of the Ukrainian army, who besieged them in Slavyansk until early July, when Strelkov abandoned the town after being encircled, and withdrew to Donetsk. His successful breakout from encirclement further strengthened his reputation for military skill.

Close to Strelkov was the head of the Russian General Military Union (Russkii-Obshche Voinskii Soiuz), ROVS, Igor Borisovich Ivanov. Ivanov fought alongside Strelkov at Slavyansk before moving on to become head of the rebel army’s political department. In this capacity he gave a daily video interview about the situation at the front and behind the lines.

ROVS was founded in 1924 by General Wrangel as a means of keeping together the remnants of the White armies which had fled Russia at the end of the Civil War. Its missions were to maintain a spirit of irreconcilable hostility to the Soviets and to preserve the traditions and values of the Whites as well as of the Imperial Russian Army. Officially apolitical, in practice ROVS has always had strongly nationalist inclinations. As one of the organization’s ideologists put it in the 1930s, the White movement, “was defined from the start, and will be defined to the end, by the pureness of its guiding motive and the religious tension of its patriotic will.”

Putin’s call for reconciliation between Red and White is anathema to the modern heirs to the White Guards. They view the contemporary Russian state with suspicion due to its refusal to disassociate itself from its Soviet past. Ivanov has repeatedly denounced what he calls the “Chekist-oligarchic regime” of Vladimir Putin. The “Putin regime” is bound to fall, Ivanov says, after which only the army will be able to save Russia from chaos.

Finally, yet another Igor—Igor Mikhailovich Druz—served as Strelkov’s personal political advisor. Druz is the head of the Ukrainian branch of the Narodnyi Sobor(People’s Assembly), an “Orthodox-Patriotic” organization devoted to fighting “liberasts” and “Western values,” to promoting Orthodoxy, and to preserving the traditional family. He has denounced the Ukrainian government as “pederasts and drug addicts,” and declared that “on our flags is the face of Christ.” Narodnyi Sobor’s Russian branch claims credit for recent legislation banning swearing on television and in films, and prohibiting the spreading of “homosexual propaganda” to minors. The organization’s exclusive focus on moral values rather than material issues definitely puts it on the conservative fringe of Russian politics.

If Moscow really has been pulling the strings in Donetsk all along, it chose a curious set of agents to do its bidding. And even if Strelkov and his associates ever were taking orders from the Kremlin, by the time Strelkov resigned he was giving the impression of having long since slipped the bounds of control. He had come to represent a modern version of ROVS’s spirit of irreconcilability, in opposition to what nationalist circles viewed as Putin’s weakness in the face of Western pressure. Newspaper headlines such as “For Strelkov, Against Putin,” and a poll indicating that Strelkov might beat Putin in a vote for the Russian presidency, had turned the rebel commander into a political liability.

It is said that Moscow’s preferred rebel is Oleg Tsaryov, speaker of the so-called “parliament” of Novorossiia (which combines the Donetsk and Lugansk People’s Republics and whose flag bears a startling resemblance to the Confederate battle flag). Tsaryov seeks autonomy for Novorossiia within Ukraine, not unification with Russia. So, too, do some of the rebel military commanders other than Strelkov, most notably the head of the Vostok Battalion, Aleksandr Khodakovsky. So too does Vladimir Putin.

Strelkov’s image as the leader of the “war party” in Donetsk may explain why the Russian state never provided his army with the help that it needed to win its war. Indeed, there is evidence that some in the Kremlin actively oppose the rebels, and even told Strelkov to “shut up shop.” According to rumor, Strelkov abandoned Slavyansk not just because he was surrounded, but also because Moscow had struck a deal with Ukrainian oligarch Rinat Akhmetov to surrender the city of Donetsk, in return for which Akhmetov would throw his support behind the creation of an autonomous Novorossiia within a united Ukraine. Only the arrival of Strelkov’s army in Donetsk prevented this.

The architect of this alleged plot was supposedly the former head of Putin’s presidential administration, Vladislav Surkov. Often referred to as the “grey cardinal of the Kremlin” or as the “chief ideologist of Putinism,” Surkov is said to head the peace party in the corridors of power in Moscow, and to be keen to ditch the rebels in order to restore normal relations with the West. Very possibly, none of this is true, but the fact that the rumor circulates is indicative of how the war party does not feel that the Kremlin is on its side.

Much has been said in the past couple of years about Putin’s increasing conservatism. But the romantic, nostalgic White Russian imperialism of the three Igors—Strelkov, Ivanov, and Druz—is a different brand of conservatism than the pragmatic nationalism of Putin. Indeed, it is politically dangerous to it. The recent changes of leaders can, therefore, be seen as an effort to put in place more ideologically acceptable personalities who will be more willing to accept a settlement that sees Novorossiia remain part of Ukraine. In this way, Moscow has taken a step towards peace. The question now is whether Kiev and its Western backers are willing to take a step of their own in response.

Paul Robinson is a professor in the Graduate School of Public and International Affairs at the University of Ottawa, and the author of numerous works on Russian and Soviet history.